President and Chief Executive of TDB 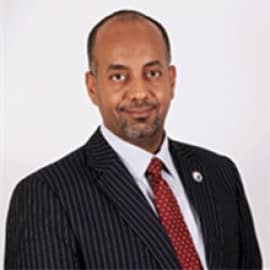 Admassu Tadesse is the President and Chief Executive of TDB (formerly trading as PTA Bank), the Eastern and Southern Africa Trade and Development Bank, since his appointment in 2011.

Previously, Mr. Tadesse was Executive Vice-President at the Development Bank of Southern Africa in Johannesburg, responsible for international finance and corporate strategy, where he served for 10 years.

Prior, he worked as an advisor, analyst and specialist, with various international funds and organizations in New York. Mr. Tadesse holds an MSc from the London School of Economics, and an MBA from Wits Business School in South Africa.

He is also an alumni of Harvard Business School and the University of Western Ontario. He has served on several boards, trusts and industry bodies in Africa and internationally. He has lived and worked internationally for over 35 years, in some ten countries across three continents.