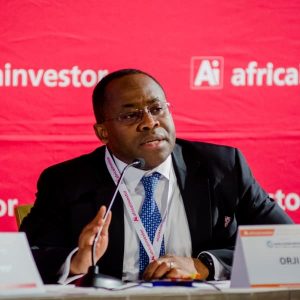 Mr. Orji brings a wealth of global experience in the financial services sector to his role as MD/CEO.

He joined NSIA as CEO in October 2012, from Switzerland’s largest bank, UBS Securities, where he was Managing Director in the New York branch of its Equities Division.

Prior to his UBS experience, Mr. Orji spent six years at JP Morgan in London, 2001-2006, rising from the position of Vice President to Managing Director within the Equities Division.

Prior to JP Morgan, he worked for Goldman Sachs Asset Management, London, 1998-2001, as an Analyst/Portfolio Manager.

Mr. Orji studied Chemical Engineering at the University of Port Harcourt, Nigeria, graduating in 1990. He also obtained an MBA from Harvard Business School in 1990.