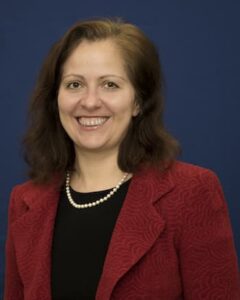 Anastasia Titarchuk is the Chief Investment Officer for New York State’s Common Retirement Fund. As of March 31, 2021, the value of the Fund was $254.8 billion. Under the direction of State Comptroller Thomas P. DiNapoli, Titarchuk is responsible for developing and implementing investment strategies to ensure that the Fund remains one of the best-funded and best-managed public pension plans in the country. The Fund holds assets in trust for more than one million employees and retirees from state and local authorities.

Prior to Ms. Titarchuk’s appointment in 2018, she was Deputy CIO since February 2015. Anastasia joined the Fund in 2011. She started her career on Wall Street in 1998. Prior to joining the Fund, she worked in a variety of leadership roles at Bank of America, Barclays Capital and Lehman Brothers, and JP Morgan. Anastasia has always had a derivatives focus. Her experience spans both liquid and structured products across a variety of markets including equities, emerging markets and rates.

Anastasia was named as a 2015 Hedge Fund Rising Star by Institutional Investor Magazine.