“When Should We Trust Autonomous Learning Systems with Decisions?”

Vasant Dhar is a Professor of Information Systems at NYU Stern School of Business and the founder of SCT Capital Management, a firm implementing an Adaptive Quant Trading (“AQT”) program, which uses machine learning (“ML”) pattern recognition algorithms (“algos”) to make investment decisions.   Vasant started his ML based education and career in the 1990’s and 2000’s with data mining projects at Morgan Stanley and proprietary trading at Deutsche Bank, before establishing SCT.

One of the biggest ideas raised was “when can you trust a machine with your investing decisions?”.  The task of finding a consistent strategy with outperformance is very difficult for humans.  Algorithmic machine trading has shown to be effective for short-term trading but not so for longer-term investing..  There are several processes being implemented for algorithmic processes, not only for investments but also for driverless cars, flying drones, early life education, spam email, and disease detection, with varying levels of success.  All these processes depend on a level of trust that humans need to have in machines for these automated processes to being widely adapted.

Vasant detailed a chart called the “automation frontier”, to help evaluate processes for machine learning applications, based on two factors. 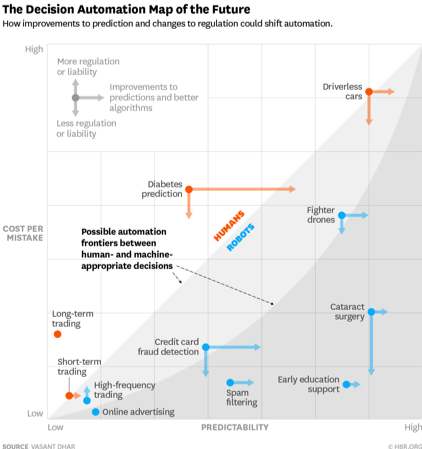 With investment management, Vasant generally observed that model complexities can be a killer to efficient research processes, data availability and scope will be very impactful, and back-test models that performed well will often do poorly in reality due to model overfitting the data or having too high of expectations.

A few insights from Q&A session:

Robert Schapire is a Principal Researcher at Microsoft Research and former professor of computer science at Princeton University, who has extensively researched theoretical and applied machine learning over his career.  Robert detailed the Contextual Bandits Problem (“CBP”), a theorem where an AI algo learns to choose actions based on observed rewards with the goal of learning to maximize these rewards.  Two examples of a CBP includes: Websites choosing which advertisements are best suited to users and optimal medical treatments prescribed by doctors.

The general outline to the CBP follows a process of formalizing the learning problem or what needs to be solved, followed by which algorithms are best used to implement, and used with relevant applications.  A formal model to the CBP involves gathering the relevant context to address a problem, determining the reward values for certain actions (reward vectors), running through several observations of chosen policies and determining the perceived rewards from policies.  There is a determined “best policy” given rewards per chosen policies and the goal is to optimize the algorithm to make the closest decisions to this “best policy” as much as possible, while also minimizing error with low reward policies.

Some of the challenges inherent with the formal model include very large amount of possibilities (decision trees), algo learns about all policies while also attempting to converge on the best policy, and only observing rewards for policies within the policy space.

Bryan Kelly is Professor of Finance at the Yale School of Management and has primary research with asset pricing and financial econometrics.

In the 1930’s Alfred Cowles III was an American economist who researched if professional stock forecasters could accurately forecast markets. He read Wall Street Journal articles from the previous 30 years, made judgements of Bull, Bear, or Neutral sentiments, and created back-tested portfolios based on these market calls. Alfred discovered that a passive Dow Jones portfolio performed better over this time horizon.

Today, there are almost infinitely more sources of information from the early 20th century and it’s practically impossible for humans to make informed decisions on all sources of written pieces.  In the past two years alone, humans have created more data in size than all previous human history.  Computers can now read, analyze, and score text observations into “tokenized” numerical data while assigning value to these observations.  There is an explosion for the amount of research in text or unstructured data, where humans usually can’t observe text as numerical matrices the way computers can.

Financial markets inherently possess low signals and a lot of noise in available data.  The more predictability someone can find, the more this advantage is priced into markets, defined with the efficient markets hypothesis. Text differs from traditional quantitative data in two ways:

Penalized Regression is a method to help compress or reduce dimensionality of text data while also throwing out meaningless data and assigning high coefficient predictor values to the most relevant text.

Topic Modeling is a factor model for word counts, that looks to cluster certain words into associated topics.  For example, energy is a topic and “oil”, “reserves” and “solar” are associated words. This process will often visualize a time series pattern (usually as a line chart) for the frequency of certain clusters of words related to a given topic.

Conclusions from Brian’s work and research

Paul Gao is an Associate Professor of Finance at Notre Dame University.

Traditional asset pricing models assume that information is incorporated into prices instantaneously, but this is usually with information that is conditioned to be relevant and important.  Information needs to attract investor attention, otherwise it might lead to slow information diffusion and underreaction to possibly relevant news.

While examining the impact of investor attention, participants are split into retail and institutional investor bases.  Retail investors are less likely to immediately act on information, and are triggered by salient events, resulting in delayed, positive, and temporary price pressures.  Institutional investors possess greater resources and are more likely to immediately transact on news, having permanent price impacts.

Given the speed and availability of news releases in this modern era, its difficult to measure investor attention.  Google’s Search Volume Index (“SVI”) (accessible at trends.google.com) is a direct measure of attention and is mostly attributable to retail investors.  SVI is a tool provided by google that can help any user visually model and track terms that are searched in Google for a variety of time-series and cross-sectional data.

Recently, a similar measure was developed for Institutional investors. Abnormal Institutional Attention (“AIA”) is based on the number of times Bloomberg users read an article about a firm or search for news on a firm.  Bloomberg calculates this measure by averaging the number of reads or searches on a firm over an 8-hour period and compares this to a moving average of 8-hour periods over the past 30 days.  The measure is given a score of 0 if below the 80th            percentile of moving average, but assessed a higher score for any movement up the percentile range (max score of 4 if +95th percentile).

“Media and Its Interaction with Financial Markets”

Ronnie Sadka is a Professor of Finance at Boston College.

Media is an avenue through which information is gathered, processed, and disseminated to the public.  Research on media data is typically focused on direct effects of media coverage to predict returns with individual stocks or US aggregate equity.  Ronnie’s research studies the interaction of media with individual equities, US aggregate equity, as well as currencies.

Media Types were separated into these sources:

“Negative News Sells”; With general and specialized media, writers are typically compensated to produce information whether its new and relevant or they just need to produce regular reports.  Information from specialized media and company press releases are generally positive sentiment and might possess bias of opinions.  Distance from a source can show biases as well, as a reporter that’s closer and more associated to a firm, is less likely to have negative sentiment compared to outside reporter.

Examples of recent media sentiment measures include the following:

A sample study was created using 10-day laddered portfolios, while also examining relative autocorrelation in different markets, based on weekly sentiment data and price returns of foreign exchange, individual equities and aggregate country equites.  While examining the results of these sample portfolios over a 4-year period from March ’13 to April ’14, a reinforcement effect emerged.

“What Machine Learning Can and Cannot Do”

Predictive modeling can be defined as gathering data and trying to determine a machine learning (“ML) model with applicable predictability.  Machine Learning and Artificial Intelligence (“AI”) has certainly developed in several ways as follows.

1) Beating human players in games like Go, Poker, and Jeopardy.

Professionals will need to evolve from the changes in society due to the increasing amounts of data and capabilities of AI technology.  Some of the desired skills of data analytics professionals are detailed below.

Good intuition, experience and dedication are all very necessary to be most effective in developing models.  How we use these models will greatly impact our actions.  They need to be tools that help make decisions and used as a secondary input, not as an automated decision making.